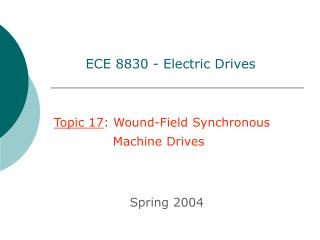 Flat Belt Drives - . 1. introduction the belts or ropes are used to transmit power from one shaft to another by means of

Electric Flux and Gauss Law - . electric flux, definition. gauss law q in is the net charge inside the surface. applying

ELECTRIC CHARGE - . just as the mass of the earth exerts an invisible force on you because of your mass. any two objects

The Use of Real-Time Simulation Technologies: Applications to electric Drive, Power Electronic and Grid Systems. - The

Baldor Energy Savings Tool Version 3.0 - . our mission is to be the best (as determined by our customers) marketers ,

Chapter 5. Electric Machines - . 5.1 introduction. one of energy can be obtained from the other form with the help of

A+ Guide to Hardware, 4e - . chapter 7 hard drives. objectives. learn how the organization of data on floppy drives and