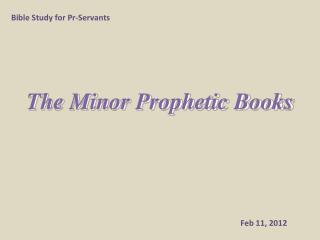 Bible Study for Pr-Servants. The Minor Prophetic Books. Feb 11, 2012. Introduction. Probably the least studied section of the Bible. “Minor” designation is not given based on the importance of the material contained, but rather the shortness of each respective writing. Overview of the Prophetic Books - . the book of daniel and the book of haggai. 12 minor hosea joel amos obadiah jonah

The Prophetic Sunnah - . an introduction to its preservation, compilation, classification, and application. course

The Prophetic Canon - . kings and prophets in israel and judah. bible basics. history of the kingdoms: judah and israel

The Prophetic Identity - . viv grigg. the person of the holy spirit. ruach , the wind, the breathe of god, carrying

THE PROPHETIC GIFT - . lesson 2 for the 10 th of january, 2009. the prophetic gift through time. “ from the beginning

Prophetic Gifts - . the prophets and the wise men. who was the messiah? a few prophecies about identity. the son of god

TESTING THE PROPHETIC WORD - . 1 john 4:1 – 5 for every good thing there is a counterfeit. not every spirit comes from

PROPHETIC DECREE - . dan 1:4 they had to be handsome, intelligent, well-trained, quick to learn, and free from physical

The Major Prophetic Books MjP4:The Book of Daniel The Statesman and Prophet - Bible study for pr-servants. the major

Moving in the Prophetic - . prophecy in the bible. god promised that in the last days there would be an out pouring of

Daniel “The Prophetic Civil Servant” - . context. staying true to god in a world that isn’t. indoctrination of the

Prophetic Evidence for the Bible

Prophetic Intercession &amp; a Prophetic Lifestyle!!! - . prophetic intercession – the basics how to maintain a

Basics of the Prophetic Ministry - . god wants to communicate !!! the voice of the holy spirit amos 3:7 – god,