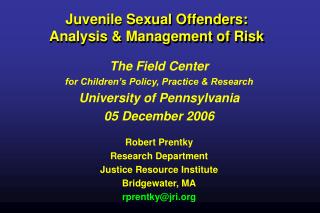 INSTITUTIONAL CARE OF JUVENILES AND THE NORDIC MODEL OF JUVENILE JUSTICE - . high-risk offenders under the age of 18

Life Stages - . juvenile to adulthood. juvenile. juvenile : phase of life from weaning to the onset of puberty or sexual

History of the Juvenile Justice System - . slide 2. after completing this chapter, you should be able to:. describe how