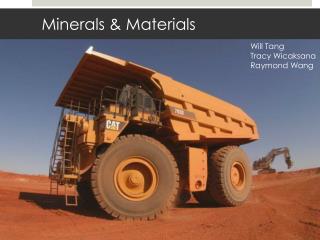 How Minerals Form In general, minerals form in two ways: - . by crystallization of magma &amp; lava by

Identifying Minerals - . look at the following minerals. which do you think are the same types of minerals and which do

Minerals - . essential questions: . what are minerals made of? how are minerals formed? how does the elemental

Minerals - . what are minerals. all the rocks and minerals in the earth’s lithosphere are made of elements, but not all

Chapter 23 Materials management - . resource use. how much is left?. mining. is used to extract valuable minerals from

Minerals - . mar 3 2009. minerals. are all non-living solid material most minerals are rare. like gold common minerals

Minerals Are Everywhere! - . you may not be aware, but minerals are in our kitchens, bathrooms, cars, etc. continue to

MINERALS - . reese. how do they form. minerals form when molten materials cools and hardens inside the earth or on the

Minerals - . a mineral: occurs naturally is inorganic is solid has a crystal structure has a definite chemical