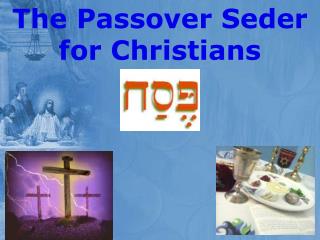 The Passover Seder for Christians The Passover Seder for Christians

God Promises the Messiah - . july 28. think about it …. what kinds of promises do we make? why do we sometimes not keep

The Passover Seder - . the passover seder. the four

The Passover and the Seder Meal - Walt we are learning to describe the key themes and events of the first passover;

Passover - . (pictures are for pre-reading discussion and vocabulary brainstorming). 10. 4 ?. a page for coloring

Christ, our Passover - . for even christ our passover is sacrificed for us: therefore let us keep the feast,... [1 cor

The Feast of Passover - . presented by dr. w. terry bailey. the feast of

Was the Messiah prophesied to be the seed of Jacob or Ishmael? - . who was abraham? genesis 11:27-32. original name was

The Passover Rite - . the passover rite. on tenth day, pick a lamb on 14 th day, at evening, kill the lamb blood upon

In The Footsteps Of The Master: The Life and Times of Jesus Christ - . jewish background of the passover june 17, 2012.

Passover - . lesson objectives to understand why jews celebrate passover to know what happens during the passover

The Passover - . fulfilled in christ. the lord’s passover in egypt, exo. 12:7-13. jesus ate passover with apostles,