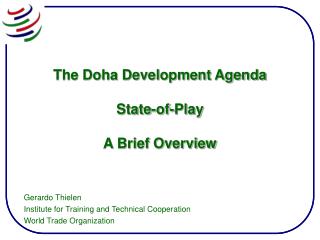 The Doha round of WTO talks - . waqas latif bba(hons) osama qadri bba(hons) mohammad ali jinnah university. why it is

Report on the 8 th Ministerial Conference of the WTO (15-17 December 2011) - . presented to parliamentary portfolio

The WTO Doha Development Agenda: What can the Ministerial Conference in HK Achieve? - . yun-wing sung professor and

Update on On-going Negotiations on Agriculture at the WTO: Implications for India - . trade division department of

The Quad—BRICS Standoff and the Uncertain Future of “Single Undertaking” Trade Negotiations at the WTO - . david a.

WTO-AoA NEGOTIATIONS STATE OF PLAY - . genesis. wto came into existence on 1-1-1995 with the conclusion of uruguay round

Agricultural Trade, WTO and the Doha Round: What is the relevance of CAP reform - New orleans - june 2, 2005. 2. outline.