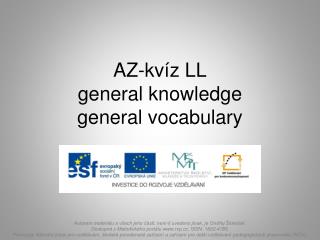 Judith Harvey General Manager – W5 - . w5 is an award-winning, interactive discovery centre with over 250 exhibits in

Drug Use in General and School Population : GPSs and School Surveys in the Czech Republic - . viktor mravčík md the

General Surgeon - . molly myers. table of contents. career description similar careers is this for me skills you need

General Forms of Retelling - . there are many variations of the retelling procedure as brown and cambourne’s (1987).

AICE General Paper - . topics. the general paper…what does it look like?. administered in may/june written examination,