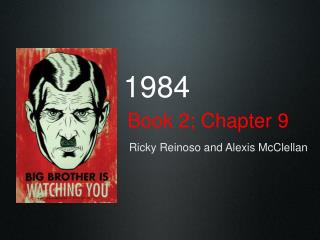 1984. Book 2; Chapter 9. Ricky Reinoso and Alexis McClellan. Characters. Winston Smith- is a hard worker as is proven in this chapter by the fact that he worked 90 hours in five days. He receives the book in the briefcase but has not had the chance to read it for six days. 1984 - . by xavier villaire. this is one of the saying though out the book. war is peace freedom is slavery ignorance is

1984 - By george orwell. 1984. terms you should you know. totalitarianism dystopia proletariats ( proles ). this book.

1984 - . get your notes out! add the following to those notes…. let’s talk about your answers. in what ways do you