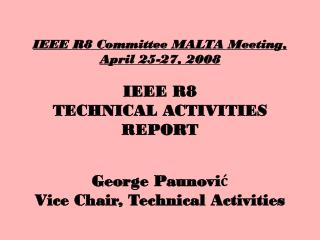 IEEE R8 COMMITTEE MEETING - Why istanbul?. located in the center of the old world, istanbul is one of the world's great

IEEE R8 Student Activities - . who will be speaking to you?. ieee region 8 student activities. e-mail: sb-r08@ieee.org.