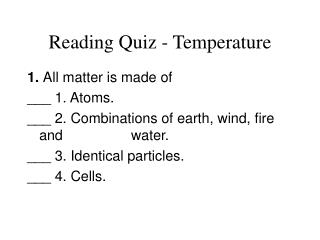 Reading Quiz - . a container of helium gas is heated, raising the temperature of the gas. this causes the average kinetic

READING QUIZ - . the moment of a force about a point or an axis provides a measure of the force’s tendency ___. a) to

Reading quiz - . you may use your study guide but not your book!. the book thief part one. where is liesel moving? why?.

Reading Quiz - . most of the power released by a hydrogen bomb comes from which of the following? nuclear fusion nuclear

Reading Quiz - . chapter 3 describe how education was handled in the colonies. africans taken as slaves were to cultivate

Reading Quiz - . name two factors that can shift the demand curve name one “complement” to hamburgers. what is a

Reading Quiz - . chapter 3 sect 1 this more than doubled the size of the united states and cost the us $15 million. why

Reading quiz - . why was absalom released from the reformatory?. 2. what recent event does the news article in chapter 11

READING QUIZ - . sound waves can travel in air but not in outer space but not in steel. but not in water. physics help

READING QUIZ - . 1. one of the assumptions used when analyzing a simple truss is that the members are joined together by

Reading Quiz - . who is the “journeyer” of the story? describe him. where is he going? (place to go) what is the

READING QUIZ - . the moment of a force about a specified axis can be determined using ___ . a) a scalar analysis only b)