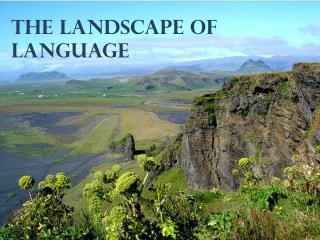 The Landscape of Language The Landscape of Language. Diction! . Why THAT word? Why THAT choice?. Aphorism. A short, pithy instructive saying ; a brief statement of a principal (maxim, credo ) . “The first rule of Fight Club is you do not talk about Fight Club.” –Tyler Durden , Fight Club

The Landscape of Language

Landscape of Caste - . ‘ transmission of craft-knowledge created occupational castes’ (64). shift from hierarchy of

The Changing Landscape of Organizations - Some characteristics of postmodern society (information revolution). things

The Landscape of Tourism in Oman within the Context of the English Language - . victoria tuzlukova and rahma al-mahrooqi

The Language of Prejudice - . lance jessurun and emma blyth. causes of prejudice. prejudice results from generalizations

The Language of Oratory - . definition. the skill of making powerful and persuasive speeches the derived word oration ,

The Importance of Landscape - . kyle rosbrook. the significance of landscape to the first nations and metis people.

1 About LANGUAGE The definition of Language Design Features of Language - Key points in this unit. 1 about language the

The Sounds of Language - . the sounds of language. phonology, phonetics &amp; phonemics… producing and writing