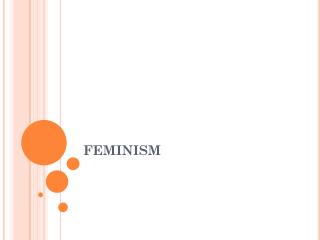 FEMINISM. Second –wave feminism was inspired by the political activism of the 60s and connected historically with the first-wave feminism which produced the Declaration of Women’s Rights in 1848 and culminated in the campaign for women suffrage during the early twentieth century.

Feminism - . read the following pages from the americans : 982-986. feminism post-wwii. question: when you hear the word

ISLAMIC FEMINISM - . 14.09.11. feminisms no boundaries produced in particular places with context bound issues it is a

Feminism - . lo: to assess the feminist perspectives of the family. (radical, liberal and marxist). 3 types of feminism.