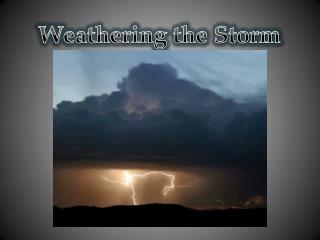 Weathering the Storm. These are the major types of severe weather that we will learn about today Thunderstorms Tornadoes Hurricanes. A storm is a violent disturbance in the atmosphere. They involve sudden changes in air pressure, which cause rapid air movements. Thunderstorms.

The Cay Theme &amp; Literary Analysis - . you will need to choose one of the themes and analyze it in a paper. take

Weathering and Erosion - . created by: madelyn dzierzynski and taryn grasser. weathering is the breaking down of rocks,

Jet Stream - . what is the jet stream?. a narrow belt of high-speed winds that blow in the upper troposphere and lower

Desert - . by terrance carter ms.post. desert . a desert is a area that loses more moisture than it gains. lack of

Desert Erosion and Landform D evelopment - . how do you think this formed?. what are the main agents of erosion in

Rural Entrepreneurship for Women: A Case for Wealth Creation by Africa’s Rural Poor amidst Global Financial and

Forces That Shape Earth’s Surface - . weathering. weathering is the breaking down of the materials of earth’s crust