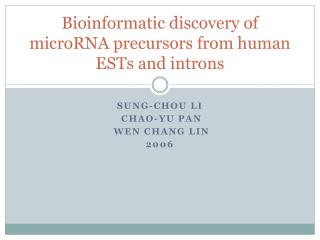 Bioinformatic discovery of microRNA precursors from human ESTs and introns Bioinformatic discovery of microRNA precursors from human ESTs and introns

Precursors - The united states breastfeeding committee: everything you always wanted to know (but were afraid to ask!)

PowerPoint and Discovery Streaming Video - . by: palmerton’s tech wizards. using powerpoint. bulleted lists. this is an

Relationship of Gene’s Type and Introns - . chi k. to. eukaryotes contain multiple introns per gene. throughout

PRECURSORS - . philosophy of mind and brain

Exons and Introns - . -rna transcript, while in the nucleus, is composed of exons, sequences of nucleotides that carry

MicroRNA - . introduction. mirnas are rna genes which are transcribed from dna, but are not translated into protein . a

Precursors of Structuralism - . language durkheim and idea of sacred/profane linguistics melds sociology, the study of

Exons and Introns - . chesley leslin. steps in production proteins. exons: the sequences in the dna molecule that code

microRNA - . cass jabara. exam questions. what are micrornas, and what is their primary function? where are micrornas