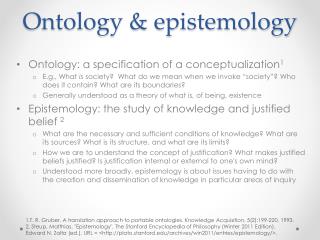 Ontology & epistemology. Ontology: a specification of a conceptualization 1 E.g., What is society? What do we mean when we invoke “society”? Who does it contain? What are its boundaries? Generally understood as a theory of what is, of being, existence methodology - ontology - . who identifies who? how? how to structure input of research?. d2.1 nabeth 2004. ontology in

From SHIQ and RDF to OWL: The Making of a Web Ontology Language - . ian horrocks peter f. patel-schneider and frank van