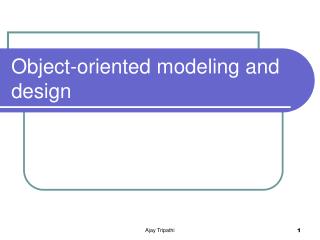 Object-oriented modeling and design. Introduction . It is a new way of thinking about problems using models based on real world concepts. The basic construct is object which combines both data structure and behavior in a single entity. Object-oriented Design - . objectives. to explain how a software design may be represented as a set of interacting

Object Oriented Design - . in this lecture, we will introduce the basic notions of object oriented design we will