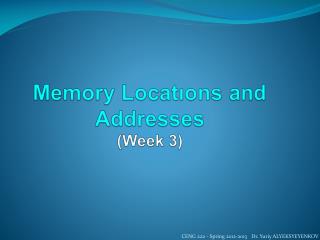 Week 4 Lecture slides - Cosc 3p92. week 4 lecture slides. it is the mark of an educated mind to be able to entertain a

Chapter 10: Memory Interface – Part I - . 10–1  memory devices . before attempting to interface memory to the

Chapter 13 - . memory devices and systems. memory basics. memory is used to store data or instructions for a m icro p

Memory Management - . chapter 7. memory management. it is the task carried out by the os with support from hardware to