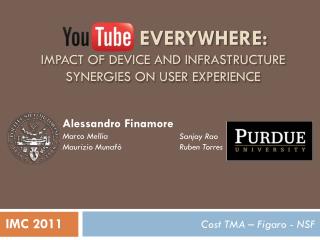 Everywhere: Impact of Device and Infrastructure Synergies on User Experience Everywhere: Impact of Device and Infrastructure Synergies on User Experience

Intro to Adaptive Web Design [edUi 2013] - For years, designers and developers have griped about the difficulties they

ABOUT COMPUTER - . computer. it is an electronic device which accepts data supplied by the user. inputs, stores and

Goals - . provide an overview of the 860 device allow a quick start of an 860 design cycle gain familiarity with debug

Device Integration - . a practical guide to device integration with an emphasis on the modbus serial protocol. goals for

IT Infrastructure for the Enterprise - Mike henderson principal consultant, eastern informatics past co-chair, it