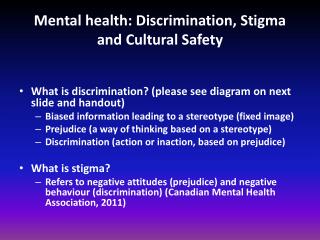 Mental health: Discrimination, Stigma and Cultural Safety . What is discrimination? (please see diagram on next slide and handout) Biased information leading to a stereotype (fixed image) Prejudice (a way of thinking based on a stereotype)

Visual- People Walking - According to the national institute of mental health, one in four adults—approximately 57.7

According to the national institute of mental health, One in four adults—approximately 57.7 million Americans—

A Positive Mental Attitude - . a positive mental attitude is the real foundation for optimal health. your attitude can