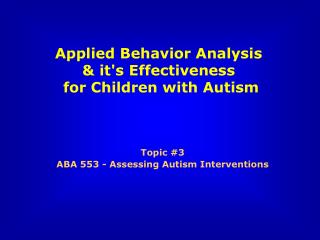 Applied Behavior Analysis & it's Effectiveness for Children with Autism. Topic #3 ABA 553 - Assessing Autism Interventions. How Can We Use Science to Study What & How a Child Learns?. We have a scientific branch of psychology that has been developing for SEVENTY years It’s called…. TOPIC 3 - . accounting for leases and hire purchase contracts. 1. introduction. leases and hp contracts are means by

Topic 3 - Building contract. suppose you have bought a piece of land and engage a contractor to build your

Topic 3 - . atomic structure and electron configuration. light. is a form of electromagnetic radiation. waves of electric

Topic 3 - . unit 4 - electricity. topic 3: resisting the movement of charge. resistance. resistance a property of a

Behavioural Interventions for Children with Autism - . priscilla paul january 27, 2010. the