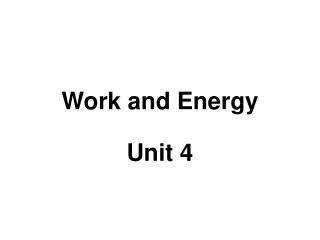 Work and Energy. Unit 4. W = Fcos q D x. Lesson 1 : Work Done by a Constant Force. When a force acts on an object while displacement occurs, the force has done work on the object.

Energy, Work, Power, and Mechanical Advantage - . intro. what would happen to the force of gravity if you doubled the

Work, power and energy - . warm up 5/2/12. what is the first law of motion? which formula is associated with the 2 nd law

THERMOCHEMISTRY Thermodynamics The study of Heat and Work and State Functions - . energy &amp; chemistry. energy is