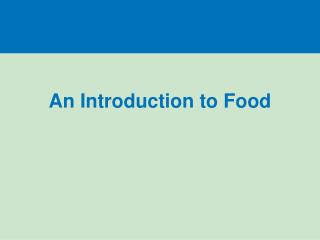 An Introduction to Food An Introduction to Food. Section 1. What is food security and why is it difficult to attain?. Many people suffer from chronic health and malnutrition. Food security means having daily access to enough nutritious food to live an active and healthy life.

An Introduction to Food

ADVANCED . fst - . food safety training in canada for food handlers. based on the canadian food retail and food services

How do they get their food? - . saw earlier in simple way, plants vs meat but is it that simple? what are some of the

BASIC INTRODUCTION TO FOOD HYGIENE - . what’s wrong?. i ate something bad, i have….. food poisoning!. how do people

All fungi - . make their food. absorb their food. produce mushrooms. have chlorophyll. fungi do not. carry on