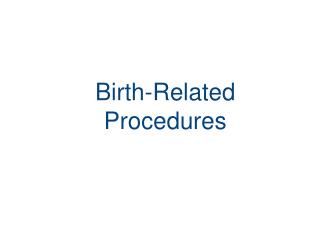 Birth-Related Procedures. Impact of Procedures on Childbearing Woman. Disappointment Guilt Conflict between expectation and need for intervention. Spontaneous Labor. The decision to induce labor is not one to be taken lightly. Better Safe Than Sorry: The Biological Basis of Fetal Alcohol Syndrome and other Alcohol-Related Birth Defects - When a

Overview of Reproductive Health and Family Planning - Learner objectives . by the end of the session, participants will

Care of a normal baby at birth - . (until 1 hour after birth). objectives. to describe evidence-based routine care of a

Infant Mortality, Birth Defects and other birth outcomes in Nunavut: The challenge of translating data collection into

Can cardiac procedures be graded in complexity and related with dose? - . l 8.3. educational objectives. complexity

Vital Records - . from failure to success: the importance of modernizing office policies and procedures. michigan vital