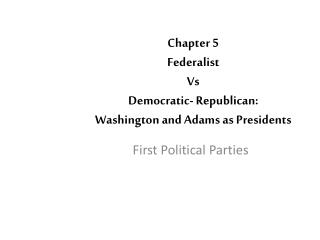 Chapter 5 Federalist Vs Democratic- Republican: Washington and Adams as Presidents

Chapter 5 Federalist Vs Democratic- Republican: Washington and Adams as Presidents. First Political Parties. George Washington Speech. Father of America. George Washington Hoped to retire from public life after the ratification of the Constitution Friends urged him to run for president

Chapter 5 Federalist Vs Democratic- Republican: Washington and Adams as Presidents

Lesson 13 : What Was the Anti-Federalist Position in the Debate about Ratification?

Federalists vs. Antifederalists - . who said it?. quote

Federalists v. Anti-Federalists - . 12.11.13. swbat to support the federalist or anti-federalist point of view by

UNIT 2 NOTES: john adams AND THOMAS JEFFERSON - . john adams. the biggest issue adams will deal with during his term will

The Federalists in Charge - . in this section you will learn that the split between hamilton and jefferson led to the

Clinton vs Trump since the conventions - The republican and democratic presidential nominees have traded barbs, insults