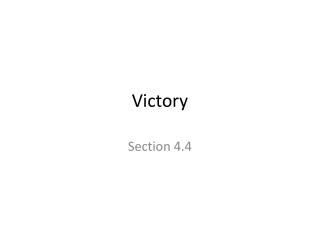 Victory. Section 4.4. Main Idea. A strengthened Continental Army, along with European allies, helped achieve a victory at Yorktown. War in West. UK held many forts in the frontier along the Mississippi River. Volleyball Victory! - . in volleyball, there are 6 payers on a team, plus one reserve. they are positioned on the court

Private Victory - . before you’ll ever win in the public arenas of life, you must first win private battles within

Victory in Europe and the Pacific - . chapter 14 section 4. end of wwii. in europe, world war ii officially ended on may

VICTORY IN JESUS - . created by dvm please share this file freely. he sought me, and bought me, with his redeeming blood.

FATEH MAKKAH: THE GREAT VICTORY - . the prophet love for peace. allah and his messenger really wanted to avoid bloodshed

Victory In Jesus - . i heard an old, old story how the savior came from glory how he gave his life at calvary to save a

Victory In the Pacific - . island hopping (leapfrogging) american strategy in the pacific by pass heavily fortified

From Victory to Defeat ( ch. 7) - . the people of israel broke faith in regard to the devoted things, for achan took some