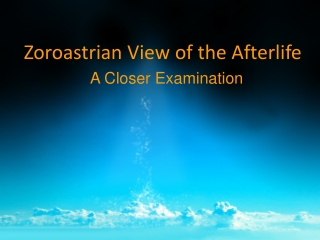 Zoroastrian View of the Afterlife Zoroastrian View of the Afterlife. A Closer Examination. Personal Eschatology: The Fate of the Person Immediately after Death. Humans are transformed into an immortal soul ( urvan) at the time of death and receive reward or punishment for their deeds.

Zoroastrian View of the Afterlife

The Living Dead - . egyptian gods, mummification, and the afterlife. introduction. to the egyptians, religion and

The “Afterlife” of Heritage Research - . developing ecrs ’ skills for the transition from academia to public,

The Six Basic Theories of the Afterlife - . 1. materlialism. nothing survives after death there is no such thing as a

Ancient Egypt and Nubia - . chapter 3, section 3: egyptian religion. the afterlife. the egyptians believed in an

Ancient Egypt The development of mummification - . mini-lesson for schools. ancient egyptians believed that their body

Do Now: What is Mummification? - Aim: why did the ancient egyptians mummify their dead?. a process to prepare a dead

The End of the World and the Afterlife – Eschatology - . heaven. “gardens under which rivers flows” highest level: Zoroastrian Poets (in Gujarati language) - . 1. viraf kapadia is a contemporary poet in gujarati and a student of western Traditional Arguments for Belief in an Afterlife - . argument from theology. “theology” = study of god “theism” =