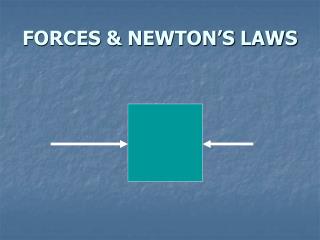 FORCES & NEWTON’S LAWS. Forces (Ch 6). Why do things move? What is the cause of this motion we have studied? Explained by Sir Isaac Newton 3 Laws of Motion Explain the way forces influence motion - what is needed for objects to move “how much” is needed Newton s Laws of Motion - How and why objects move as they do has fascinated scientists for thousands of years. in the

Newton s Laws - Tension. a pulling force.generally exists in a rope, string, or cable.arises at the molecular level, when

Content Example: Newton s Laws - Watching jim minstrell teach about newton's laws of motion. what do you notice that

Chapter 4: Newton s Laws - A body moves with constant speed in a straight line. which of the following statements must be

Newton s Laws of Motion - An object at rest remains at rest, and an object in motion continues in motion with constant

Section 6.2 Using Newton s Laws - Objectives. describe how the weight and the mass of an object are related.differentiate

Forces &amp; Newton 1 - . what is a force?. a force is an interaction between two bodies . convention: f a,b