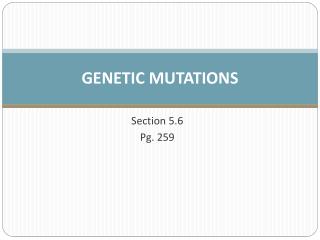 Genetic Testing - . lecture 8. overview of genetic testing. genetic diseases often depend on the genotype of an

Chromosomal mutations - . a mutation is a change in the dna generally, mutations are considered at the gene level, but

CH. 11.6 Mutations in Genes - . objectives: describe the following types of mutations: base substitution base insertion