This tribe settled in west-central Italy establishing a village along the Tiber River. - PowerPoint PPT Presentation 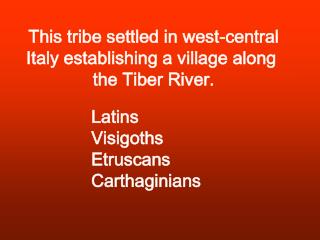 This tribe settled in west-central Italy establishing a village along the Tiber River.

1 / 254
Download Presentation
This tribe settled in west-central Italy establishing a village along the Tiber River.
119 Views

This tribe settled in west-central Italy establishing a village along the Tiber River. Ancient Rome - . the roman republic 509-27 bc. latin speaking tribes settle on banks of tiber river in the 1st half of 8

West Morris Central Guidance Services - . what do guidance counselors do ?. we are here to enhance the learning process

The Alogonquain Tribe - . by: jalen angus native american name: rowtag abooksigun it means: fire wildcat. a day in the

Mohawk Indian Tribe by Dylan Skelton - . what does mohawk mean?. the mohawk name is what their algonkian enemies used to

Virtue Village - There is a village in the far away, that village is our village, even if we don’t go, even if we

All About The Mingo Tribe - . by casey southar d. the seneca's originally lived in new york state. there homes are long

The Royal Suites of King West Village - . the investor series. toronto: the city that won’t stop growing. this city is

The Mogollon Tribe - . the mogollon culture. many mogollon groups stayed along the new mexico and arizona border. some of