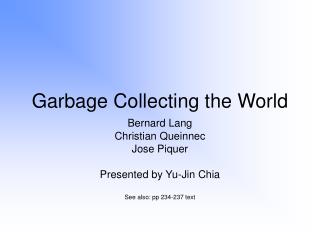 Garbage Collectors - . continuously and compacting by lyndon meadow. presentation contents. why do we want garbage

Garbage Collection - . what is garbage and how can we deal with it? garbage collection schemes reference counting mark

Garbage - . peter berck 2000. problem. garbage isn’t free to dispose of properly, but the opportunity to illegally

Garbage In, Garbage Out

The Great Garbage Patch - . where is it located?. what does it look

Garbage Collection - . terminology. heap – a finite pool of data cells, can be organized in many ways roots - pointers