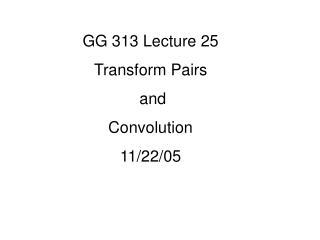 GG 313 Lecture 25 Transform Pairs and Convolution 11/22/05. Today we continue our look at some important transform pairs and introduce convolution. Recall from last class:. Lets look at the sine wave transform.

We have the FT pairs (the relationship is symmetric) - Circular or periodic convolution (what we usually don’t want!

Lecture 7: Z-Transform - . remember the laplace transform? this is the same thing but for discrete-time signals!

• URL: .../publications/courses/ece_3163/lectures/current/lecture_27 - Lecture 27: properties of the z-transform and

LECTURE 34 : PROPERTIES OF THE Z-TRANSFORM AND THE INVERSE Z-TRANSFORM - . objectives: modulation, summation, convolution

Convolution in Matlab - . the convolution in matlab is accomplished by using “conv” command. if “u” is a vector