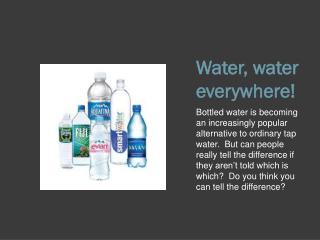 Water!! - . water!!. apes: chapter 12. in groups of 4:. what is the difference between: aquatic marine limnology

Seed Dispersal Lab - . dispersal by water. the coconut can float on water for long intervals due to an air-filled

The Extraordinary Properties of Water - . h. h. water. a water molecule (h 2 o), is made up of three atoms --- one oxygen

Water Conservation - . what is the intelligent use of water?. using water efficiently landscape irrigation focus