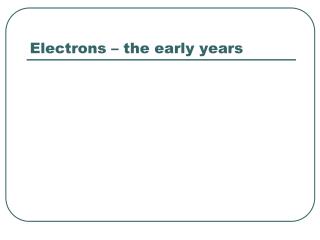 Electrons – the early years. Electromagnetic Radiation. Radiant energy that travels through space at the speed of light in a vacuum. Wave particle duality. “Light as a wave”. Waves have 3 primary characteristics: 1. Wavelength : distance between two peaks in a wave. Guidance for Implementing Effective Training and TA on the Child Outcomes Summary (COS) Process - . national webinar

The Implications of Theory for Early Years Settings: Marx, Weber, Foucault - . the subjects of marxist critique of early

Early Civilizations - . the blossoming of life as we know it…. early civilizations:. in order from oldest-youngest. the

The (early months of the) Early Years Longitudinal Survey - . simon anderson. +. =. overview. background to the survey

Early Years Foundation Stage - . what is the early years foundation stage?. covers the period birth to five. the final