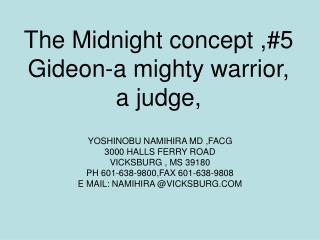 God Sends the Judges: Gideon - . introduction. our journey through the judges brings us next to gideon. after a rest of

Psalm 2 The Coronation of the Son - . &quot;behold, i have seen a son of jesse the bethlehemite who is a skillful

unLIKELY - . heroes. lessons from the book of judges. an unlikely hero: gideon. i. a soft answer for his critics judges

Boudicca: The Warrior Queen - . by jessica+ casey. . contents. warrior queen what did she do? what did she wear? how did

A Mighty Fortress - . our god is, a consuming fire, a burning holy flame, with glory and freedom. our god is, the only

Gideon vs Wainwright 1963 - . by: amanda snizek period 6. background. gideon quit school after the eighth grade and

Who is this Gideon and how will he help me? - . or how to use the database to solve the microbiology unknown. how to

FORGING WARRIORS - . warrior profession?. are we? if not us, then who? the power of the media public’s perception

1 - A Mighty Fortress - . 1. a mighty fortress is our god, a bulwark never failing; our helper he, amid the flood of