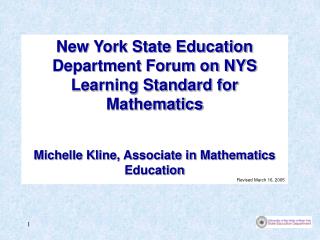 New York State Education Department Forum on NYS Learning Standard for Mathematics Michelle Kline, Associate in Mathematics Education Revised March 16, 2005. Grades 3-8 Testing in Mathematics. OVERVIEW. Why test in grades 3 through 8 every year? What will these tests look like?

Graduate education in mathematics at the University of Iowa: Building community in the heartland - . msri, october, 2008.

Elizabeth Kline &amp; Leslie Sult - Super widget. guide on the side tutorials. supporting students where they are

Welcome to Mathematics for General Education - . with david lofte. dave lofte. i was a student at hartnell from 1999 to