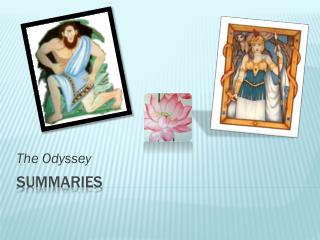 The Odyssey. Summaries. Homer’s invocation to the Muses (9 daughters of Zeus worshipped for Inspiration to art and music) The reader learns: Odysseus has already had a rather lengthy journey home. Book ONE Athena Advises Telemachus. Book 9: The lotus eaters & the cyclops. Summaries - . essential question. on your cornell note paper: what strategies are available to teach students

Summaries - . what is a summary?. a summary covers the main points of a work (writing, movie, speech, article, etc.).

Magnet Summaries - . when you are faced with a big passage, it’s difficult to figure out what the “big idea” is

Scene Summaries - . act i summaries. scene i – three witches decide to meet with macbeth after the battle scene ii –

Evaluation Summaries: - . a little bit of this and that pire. the this and the that. progress on fas revisions feedback

Book Summaries - . the unwanted: a memoir of

ACADEMIC SUMMARIES - . for use in the annotated bibliography assignment. part