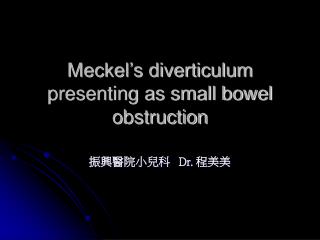 Large Bowel Obstruction - . introduction. obstruction can be defined by it’s site in relation to lumen extramural

Small Bowel - . everything you ever wanted to know and more…. basic anatomy. 270-290 cm from pylorus to cecum duodenum

The Small Bowel - . learning objective 1.describe the normal anatomy of the smal bowel 2. discuss the physiology of