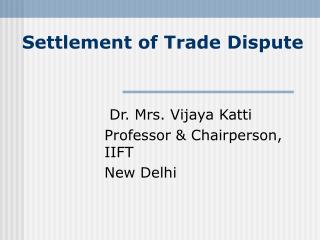 THE INDUSTRIAL DISPUTES ACT,1947 - . this act weighed much against the workers and was therefore replaced by the trade

TOPIC 7 INDUSTRIAL DISPUTES AND INDUSTRIAL ACTIONS - . upon completing this topic, student should be able to: distinguish

WTO Dispute Settlement - . a short introduction. how were disputes settled under the gatt 1947?. nearly 50 years of