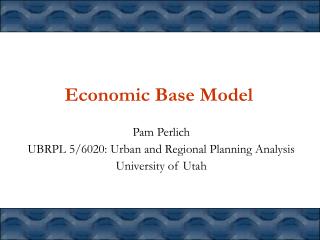 The Base Model - . objectives of the chapter. describe the basic elements of the basic principal-agent model study the

The Base Stock Model - . assumptions. demand occurs continuously over time times between consecutive orders are

Assumptions of the Economic Model - . a.k.a. rational choice, public choice, political economy individuals are the unit

An Interest Free Economic Model - . competitive and perfect markets characteristics of islamic markets an exchange and

What is an economic model? - . it is a simplified representation of economic activities, systems, or problems. production

Fanning (2005), Ch 6 Economic Base Analysis - . interpreting local employment numbers. what is the economic base?.

The Economic Base of Cities and Communities - . represents the core economic activity on which much of the community’s