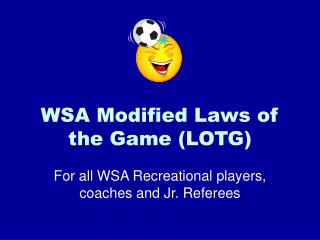 WSA Modified Laws of the Game (LOTG). For all WSA Recreational players, coaches and Jr. Referees. Law I: Field of Play. rectangular. The field of play is to be what shape?. ADUHHHHHH!. The lines are part of the areas they describe. 3. 2. Penalty Area. 1.

Jim Crow Laws - . mariah roat english 1a wakefield october 8,2009. what where jim crow laws. after the trials of plessey

Kinds of Laws - . what are laws?. they are rules or boundaries set forth by competent authorities they are there to guide

Lanchester’s Laws in Space - . overview. introduce lanchester’s laws show a game demo go through the math how to

Welcome February 13, 2011 - . modified update. keep in mind the following: review the modified handout that i distributed

Index of Orthodontic Treatment Need modified for use in Epidemiological Surveys : Modified IOTN - . written by donald

ENGLAND THE MOVE TO DEMOCRACY - What is law?. law is the written set of rules for a societythe rules" of the game

Play Satta Matka Game & Be a Winner with us - Satta may be an extensive word accustomed describe wagering. the game