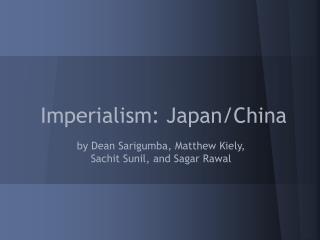 Deannex TechBoy Add/edit slides as you please, just make sure they're in order. Imperialism: Japan/China. by Dean Sarigumba, Matthew Kiely, Sachit Sunil, and Sagar Rawal. China: Spheres of Influence. An area in which another nation has power of the native country. SR.