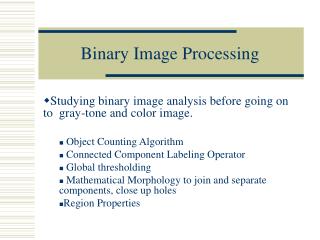 BINARY IMAGE FILES - . binary image files. part one – file formats. we’ll do it just one step at a time. first –

Binary Image Analysis - . you have to read the book!. reminder. what is a binary image?. an image that has two possible

Image Processing - . image processing. once we have an image in a digital form we can process it in the computer . we