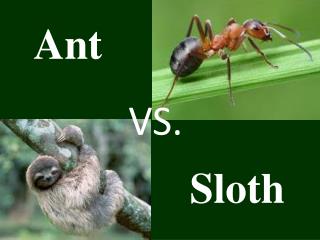 VS. Ant. Sloth. Sloths sleep from 20 hours a day and are among the slowest moving animals in the world, moving 6-8 feet per minute . And they move so slowly that green algae grows on their fur and then they lick it for nutrition. . Ant - . presentation by: bart taylor. what is ant?. the simple definition: a java-based build tool the official

Ant - . olivia g iewat. introduction. w hen uninvited guests come to your picnic what are they? they're ants. don't let

Ant - . vocabulary words. antennae . a pair of long, thin feelers on the head of insects. . cocoons . a covering of silky

Ant - Ian and cayla. ant. three parts of insects. there are three main parts of an insect: the head, thorax, and abdomen.

ANT - . another neat tool. what is ant?. what is apache ant? ant is a java-based build tool. in theory, it is kind of

Bull Ant - . by alex.h. bull ants are insects. bull ants sting you because you have annoyed them and they are protecting

Apache Ant - . a gateway to test-driven java development. what is ant?. ant is an apache jakarta project it’s a build