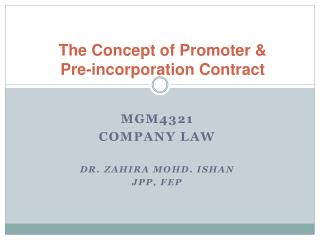 OUP Investment Claims Webinar Series - . is the vienna convention on the law of treaties dead in bit arbitration?.

CONTRACT MANAGEMENT - . an agreement enforceable by law is a contract. types of contracts. purchase order for stores,

HIGHLIGHTS OF INCORPORATION OF COMPANIES, DISSOLUTION &amp; LIQUIDATION - . incorporation of a mexican company. most

Chapter 3 Pre- incorporation Transaction by Promoters - . who is a “promoter”? a “ promoter ” is a person who

Promoter - . promoter is a region of dna that facilitates the transcription of a particular gene. promoters are located

INCORPORATION OF COMPANIES - . chapter # 04. recap. in last lecture we have discussed company (its meaning and definition

Are you a Net Promoter? - Do you know what your customers say about you?. are you actively listening?. are you a net