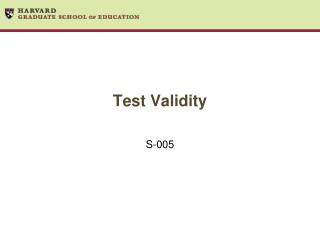 Test Validity. S-005. Validity of measurement. Reliability refers to consistency Are we getting something stable over time? Internally consistent? Validity refers to accuracy Is the measure accurate? Are we really measuring what we want?.

In this session, we explore when to test, what to test and how to test Ajax components. - Ajax testing tool review when

Sure-Vue Urine hCG (Pregnancy) Test - . this presentation was designed to provide an understanding of: - the correct