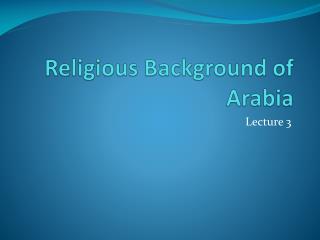 Religious Background of Arabia. Lecture 3. Started with Tawheed. Was because of the Daw’ah of Isma’il (as) as he was their Prophet (as). So Muslim, believed in Oneness of Allah. So what went wrong for Muhammad (saw) to be sent to them? Three religions in Arabia: Idol worship

The Spread of Islam - . section 3. 7.2.4. discuss the expansion of muslim rule through military conquests and treaties,

Islam: The Sword of the Prophet - . the al-haram mosque in mecca, saudi arabia, holds the holiest shrine of islam, the

The Koran - . to muslims, it is the sacred word of god written in arabic muslims believe it can only be read in arabic.