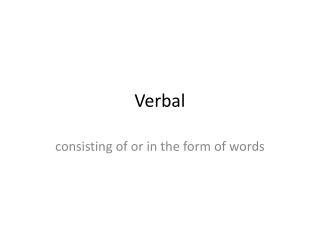 Verbal. consisting of or in the form of words. Nonverbal. is not involving or using words or speech. decoding. translation of something into a more suitable form. symbol. something used for showing what an object means. denotation. Verbal and Non-Verbal Communication - . when you are finished the quiz, open your textbooks and turn to page 187.

Verbal and Non Verbal Communication - Here is an outline of what is verbal and non-verbal communication, and how to

Verbal Advantage - . 3.4. rescind, verb. it is unlikely that government officials will ever rescind the ban on smoking

Non Verbal Communication - . how necessary is it to use and interpret it?. demosthenous christiana. non verbal