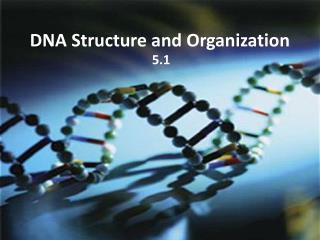 DNA Structure and Organization. 5.1 . What is DNA?. DNA = deoxyribonucleic acid The discovery of DNA and its role in genetics unfolded over many years. 1)Frederick Griffith( 1879-1941). Frederick Griffith looked at DNA in 1928 His research was on Streptococcus pneumoniae

Organization of DNA - . viral dna (and in some, rna) some circular, some linear some double stranded, some single

DNA: History, Structure and Replication - . copy. what does dna stand for?. d eoxy r ibonucleic a cid. all living things

Chromosome Structure and DNA Sequence Organization - The wrong file for lecture 8 was posted on the website. i’ve sent

DNA Structure Notes - . qq#1: what do you know about the structure of dna? be as detailed as possible. deoxyribose

Structure of DNA and the history of its discovery - . function of dna. dna is the genetic material of the cell the

The Structure of DNA - . our genes are on our chromosomes. chromosomes are made up of a chemical called dna. chromosomes

DNA Structure - . by the early 1900’s it was known that the chromosomes carry the genetic (hereditary) information

DNA Structure - . dna structure. dna consists of two molecules that are arranged into a ladder-like structure called a