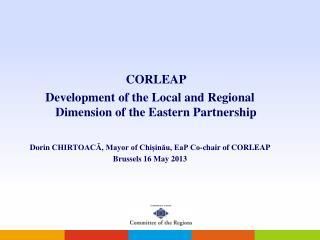 CORLEAP Development of the Local and Regional Dimension of the Eastern Partnership Dorin CHIRTOACĂ, Ma y or of Chişinău, EaP Co - chair of CORLEAP Brussels 16 May 2013. CORLEAP – a network of networks. The Eastern Partnership Eastern dimension of the ENP - . the e aster n partnership :. a new partnership to strengthen

Environmental Dimension of the Eastern Partnership - . perspectives for cooperation and the role of civil society by

Regional dimension of the crisis - . interactive thematic dialogue on the financial and economic crisis and its impact on

The regional dimension in the Reform of the UN Development System - . alicia bárcena executive secretary. regional

THE CONTRIBUTION OF CULTURE TO LOCAL AND REGIONAL DEVELOPMENT - . february 2010. famcp federation of aragonese

APRIL 2013 THE DIMENSION OF EXTRAORDINARY PARTNERSHIP - . pastor ambrose nyangao. the story. david had an army of mighty

The Economics of Trademarks The Development Dimension and the Role of WIPO - . esteban burrone wipo. alicante, june 5 and