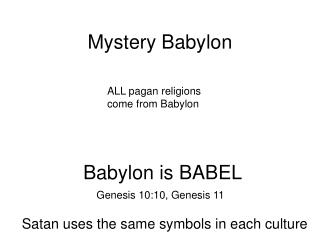 Mystery Babylon. ALL pagan religions come from Babylon. Babylon is BABEL. Genesis 10:10, Genesis 11. Satan uses the same symbols in each culture. From the ancient ruins of Ur

“By the Waters of Babylon” Vocabulary - . boasted – to speak of or assert with excessive pride fasting – to

Babylon in the Land of Shinar - . the founding principles of babylon. go to, let us make brick, and burn them throughly.

Magic and Mystery of Prague The Golem - . other &quot; golems &quot;. etienne-maurice falconet: pygmalion and

Hanging Gardens of Babylon - . by: madison baroch. why was it

“Babylon the Great” (also, the Whore) - “babylon, the whore” in one instance is the city of rome and the roman

Hanging Gardens of Babylon - . by: itzel lazcano. background. it is the second oldest wonder of the seven wonders of